The issue of women is a fundamental issue. When searching in history for the stories and legends that were written down, one sees that the woman who was most subjected to persecution and torture because of the dominant and oppressive mentalities was the woman.

Since the cradle of history and until today, it has been women who innovate and create everything for the sake of their society, and to protect and enhance the gains of their society.

When we begin to research history, we see that throughout the ages and in many eras and times, the issues of women and the idea of ​​their liberation from male domination were an idea that was incompatible with the authoritarian mentality that oppresses women.  In front of the extension of this free thought.

One of the areas where women are subjected to the most oppression and persecution of freedoms are the extremist or extremist areas, which use religion as an excuse to justify their actions against women.  Among these areas, the Iranian state is arresting women activists, politicians and human rights defenders who are working to achieve their freedoms.

Where it arrests women and puts them in prisons, and treats women in those detention centers inhumane, immoral and far from the systems and laws that defend human beings, and the right of women in particular as a member of this society.

The latest of these violations against women in Iran was the arrest of the 22-year-old Kurdish woman (Gina Amini), by the Iranian authorities’ police.

When the young woman (Gina Amini) was with her family on a visit in the Iranian capital, Tehran, the “morality police” responsible for ensuring that women wear the hijab in Tehran, stopped her, last Wednesday, 9/14/2022.

Where (Gina Amini) was arrested with four women on charges of not covering their hair with a headscarf.  During her arrest, she was subjected to torture, and as a result of torture, she fell into a coma and stayed in the hospital for three days. On September 17, 2022, Gina Amini lost her life.

In view of this violation and the loss of life of the young Kurdish woman (Haina Amini), popular discontent increased within Iranian cities, and demonstrations and protests spread against the decisions taken against the people, especially against women, who are seen as the helpless minor rib.  These protests reached all parts of Iranian cities, and thousands of civilians and civilians demonstrated in the streets to denounce this repressive policy.

Demonstrations and protests did not stop within the Iranian borders, but rather extended to neighboring cities, where thousands of women in the cities of Istanbul, Lebanon, and the regions of northern and eastern Syria took part in demonstrations to denounce this crime committed by the Iranian authorities’ police.

Women in North and East Syria, Kurdish women’s movements and organizations are in solidarity for the killing of the young Kurdish woman, Mahsa Amini, at the hands of the Iranian authorities’ police.  They organized a sit-in to condemn the murder of Mahsa (Gina).

Regarding what the Iranian authorities’ police, and what is known as the “morality police” did against the Iranian Kurdish young woman, Mahsa (Gina Amini), the member of the Kongra Star coordinator and the deputy of the Nowruz Cultural Association in Lebanon, Hanan Othman, answered our questions through a phone conversation. 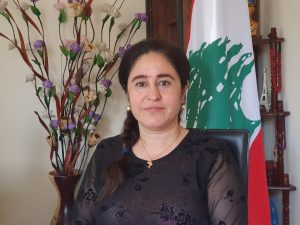 ** Recently, the Iranian state authorities’ attacks against the people in the region, especially women, have increased in severity, as these authorities suppress women’s freedom and arrest them.  Where does this mentality stem from and why are women being specifically targeted?

At the beginning of her speech, Hanan answered, “Historical events throughout the ages and in many historical eras have proven that the issue of women and the idea of ​​liberating them from male domination is an idea that spreads panic in the hearts of tyrannical rulers, to suppress and strike with an iron hand every gain that brings women closer to this reach, to make them  Every flimsy excuse is a reason to target women in various forms, means and methods.”

Hanan considered the issue of women’s oppression and the suppression of their freedom as a global social phenomenon, but this phenomenon varies from place to place, as she continued: “The oppression of women is a global social phenomenon, but in varying and different proportions.  She added, “This persecution proves the extent of the Iranian regime’s hostility and hatred for women, because the Wilayat al-Faqih’s view of “women” does not differ from that of Salafi political Islam;  Who looks at the woman as deficient in reason and religion, and she is marginal, and she must only obey and cover up.”

Hanan expressed concern about the increasing phenomenon of killing and targeting of women activists and politicians in areas where women struggle and demand their freedom and participation in social and political life.Yesterday, Hevrin Khalaf, Secretary-General of the Future Syria Party, was targeted by mercenaries under the command of Turkey… followed by the targeting of female entrepreneur Zahra Barkal and her companions in the city of Kobani.  Followed by targeting the leadership Sawsan Berhat and her companions.  And before those martyrs were many women who were victims.” She added, “But there is no other place where more women are killed, according to Amnesty International’s annual statistics, such as Iran, for many reasons, and with brutal methods, where hundreds of women were recorded between 2000 and 2022, in addition to the widespread phenomenon of acid attacks on women, where they are  Hundreds of women and girls are targeted with acid every year, but the Iranian authorities are suppressing demonstrations against this brutality and arresting and torturing women and girls activists who organized such demonstrations.

**The Iranian state uses religion as an excuse and pretext to resist the struggle of women who organize women who are forced by an authoritarian mentality.  How do you rate this thing? The Iranian state justifies its establishment of dozens of repressive institutions on the axis of anti-women In her answer to our question, Hanan indicated that “anti-women under the pretext of religion has become a systematic and continuous policy as it acts as a monopolistic tool of the authority, and justifies the establishment of dozens of repressive institutions on the anti-women axis, in order to justify the permanent monitoring of citizens in the streets. The preoccupation of patrols in the streets and institutions from  Such as the Department of Evil, the Moral Security Police, and dozens of other institutions for the same reasons and pretexts, and confronting women under the pretext of improper veiling is one of the most effective mechanisms to impose a stranglehold on society and silence any dissenting voice by the regime.

The arrest and killing of the young Kurdish woman took the fire out from under the ashes Referring to what the Iranian state police had done against the young Kurdish woman, Mahsa Amini, she said: “And the killing of the 22-year-old Kurdish woman, Gina-Mahsa Amini, after she was arrested by the police unit in charge of enforcing the strict dress codes imposed by the Iranian regime on women,  Including the obligatory wearing of the veil in public places, it has become a factor to exorcise the fire from under the ashes, as demonstrations and protests spread in Kurdistan to affect various regions of the country, amid a state of popular anger in many countries of the world. In our third question, which we posed to Kongra Star’s coordinator, Lebanon Hanan, about the position of women and feminist activists in Lebanon, especially the flagrant and repressive violations against Kurdish women and activists in East Kurdistan?Under the “Women’s Free Life” slogan, Hanan expressed the position taken by women, women’s movements and organizations and activists in Lebanon, “We, as feminist activists and women’s organizations, organized a women’s sit-in, to condemn and denounce what is happening against women in general, and in Kirstan and Iran in particular.  Under the slogan “JIN JIYAN AZADI!”, which means women are life and freedom, the participants in the sit-in demanded from the concerned authorities and human rights organizations for solidarity with and protection of women, and to give them their full freedoms.  Complete freedom to choose the life they want, and that their lives are no longer allowed to be compromised. They also demanded an end to religious oppression and leave the choice for women to wear the veil or not.Hanan Othman also confirmed, “The killing and extermination of women is evidence of the authorities’ fear of the will of women and their uprising… especially since the pretexts of veiling and modesty are flimsy and unconvincing. It is no longer sufficient to apologize or investigate to know the clear truth.”Hanan addressed her request to the media to shed light on the crimes committed against women.  “We appeal to the media to shed light on women’s crimes, because there is a systematic blackout by the Iranian authorities to hide their misogynistic crimes.”At the end of her speech, Hanan touched on all laws and charters that protect human rights, and made it clear that all these organizations are unable to guarantee women’s rights and freedoms to choose what is appropriate for them.  Despite all the popular protests in Iran and all the movements of women in the world to reject oppression, governments and human rights organizations are still unable to guarantee the rights and freedom of women to choose the life they want. They are still tortured and killed under the cover of religion.She concluded her speech by mentioning the word of Gina Amini’s mother, who said: “And as Gina Amini’s mother said: “Today is my daughter, and tomorrow is your daughters”… That is why we must unite and unite in the face of the male octopus and its oppressive institutions.” 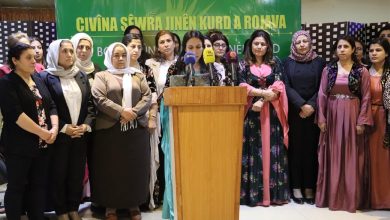 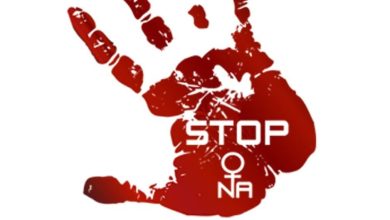 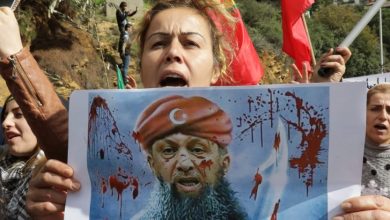 With the will and strength of the heart of the people of Yezidikhan, the decision to exterminate will be defeated 74